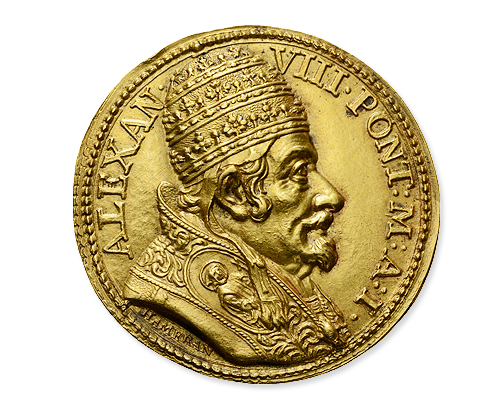 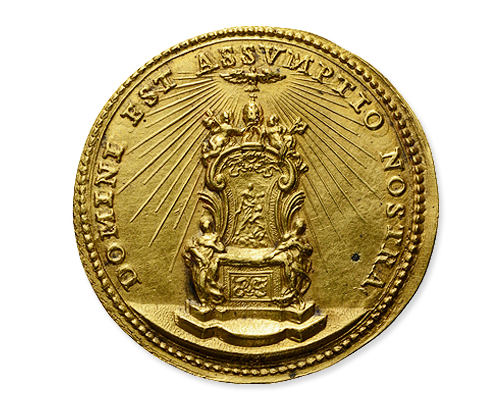 Papal medals are a favoured and worthwile area of collecting. On the one hand because real portraits of great expressiveness came into existence in accordance with the conception of Renaissance and Baroque art in the early modern era, some of these having been created by notable artists. On the other hand because the reverses in many cases shed light on fascinating historical problems of various kind.

The sample presented here has been designed by Giovanni Martino Hamerani, the grandson of the progenitor of a famous Roman goldsmith dynasty with roots in Bavaria that have been working also as die cutters of the Vatican mint. Giovanni Hamerani has been bestowed many important posts and in 1679 became medalist of the Papal State during the reign of Clemens X. succeeding his father Alberto. His creations are regareded as the most magnificent works of this renowned family of artists.

Finally Giovanni Hamerani became even a close confidant of pope Clemens XI. At the same time as Hamerani and other early modern artists portrayed personalities of their immediate environment in a realistic and vivid style, the first series of medals were fabricated that depicted historical popes as ideal images of personalities, whose countenance had never been reported by their contemporary artists. Nevertheless these products are also interesting sources considering the conception of history and the mentality of the manufacturers and their principals.

In contrast to the extremely vivid portrait on the obverse of the presented medal of Alexander VIII., the reverse with its allegoric glorification of the Holy See can be regarded more as a general expression of baroque representation. Other papal medals, however, refer to historical events of world-wide importance like the sea battle of Lepanto in 1571, liturgical solemnities of exceptional splendor or the building activities of the popes in Rome, that contribute to the enrichment of our knowledge of the historical cityscape in a decisive manner as independent sources. Other anecdotal events like the recovery of the Antoninus-Pius-column in 1703 are also documented. Finally theological programmes have been dignified in an emblematic manner.

Besides the possibility to establish a gallery of the successors of Saint Peter, especially the reverses and their manifold subjects make papal medals an especially exciting field of collecting and research.

A representative selection of papal Medals with many exceptional pieces is offered in auction 33 of Solidus Numismatik, which contains also the sample presented here.