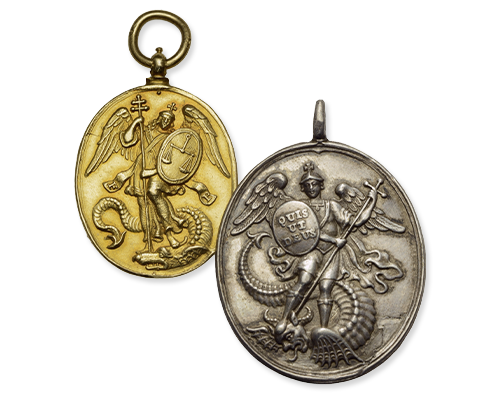 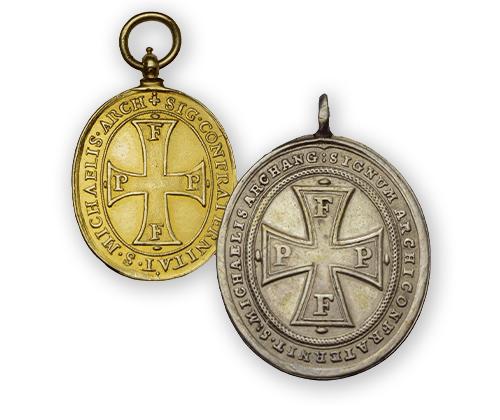 Michaelspfennige of the Baroque period

1st half of the 18th century
Obverse: St. Michael fighting the Dragon
Reverse: Cross with Sigla

The members of the Bavarian Arch Brotherhood of St. Michael wore so-called “Michaelspfennige” all their lives. In the Baroque period, social security and basic medical care were not standard. In their troubles, believers at that time relied particularly on the protection of supernatural powers.

The Arch Brotherhood of St. Michael was founded in 1693 by the Wittelsbacher Joseph Clemens von Bayern. In its heyday, the brotherhood had around 100,000 members with around 50 offshoots in Bavaria, Austria and the Rhineland - although mostly supported by members of the nobility, but also accessible to middle-class circles. In the 18th century the entire Bavarian ruling house was a member. Pope Benedict XIII awarded the rank of arch brotherhood in 1725. Since 1751, St. Michael in what is now Munich's Berg am Laim district has been the house church of the Arch Brotherhood as well as of the Order of St. Michael, which was only reserved for the nobility and no longer exists today.

Today there are still around 800 members of the Arch Brotherhood, who still carry a medal with the initials "F P F P", which stands for the brotherhood's motto: fideliter (faithful), pie (pious), fortiter (brave) and perseveranter (persevering).

The medals were made in gold, silver or bronze, depending on the member's wealth. As small works of art from the Rococo, some are outspoken treasures. On the front side, Saint Michael, armed by a shield, knocks down a dragon with a lance crowned by a cross. On the back there is always a cross with the sigla “F P F P” in the ends of the arms of the cross.