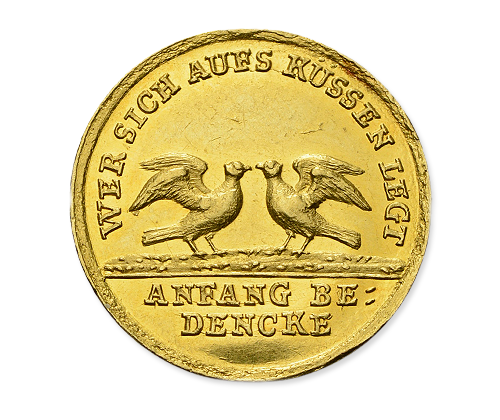 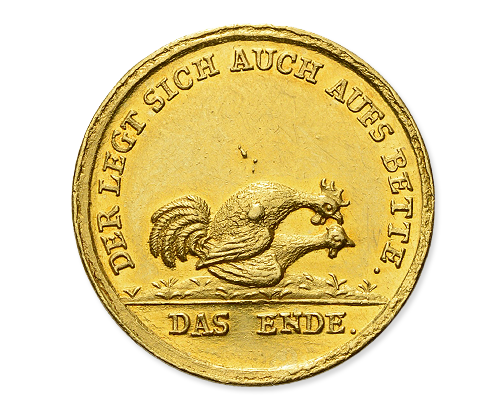 Cosel-ducat of Augustus the Strong

Friedrich August the Strong, as an ambitious, absolutist ruling Duke and Elector of Saxony (1694 - 1733), provided his country with an unprecedented economic and cultural boom, which he jeopardized at the same time with his ambitious projects including the attainment of the royal dignity of Poland. He turned Dresden into a baroque metropolis of legendary splendour. Also remarkable was the large number of his mistresses, among whom Anna Constantia, Countess of Cosel (née Brockdorff), played a dazzling role from 1704 to 1713, after which the so-called Cosel ducats are named.

Golden tokens in the weight of a ducat, which are often associated with the "princely couple", originate from the reign of August the Strong, similar to the so-called "Schmetterlingstalers" (Butterfly Talers), which originate from the time of the liaison with Anna Constantia (presumably minted in 1709). The “Butterfly Talers”, which were certainly not produced as regular coins, are still awaiting a secure interpretation as a special phenomenon in the currency system. The sometimes provocatively frivolous contents of the "Cosel ducats" make an official issuing by August the Strong or the Imperial Countess of Cosel rather unlikely. As high-quality gaming jetons, however, they could well have played a certain role in the Saxon court and are in their significance and use still a largely incomprehensible part of Saxon numismatics and moral history. The function as gaming jeton is quite plausible, which is also indicated by the degree of abrasion of many pieces. The present copy with explicit erotic content is rarely well preserved.