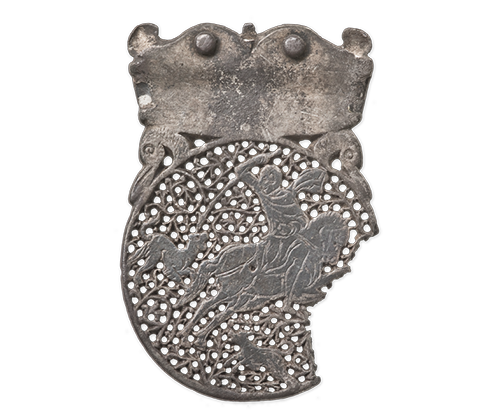 Belts have been a characteristic feature of costume of civil servants and soldiers in the late Roman Empire. They were a symbol of position and status within society, that could be amplified by the use of precious materials and an intricate finishing.

Because of their value belt fittings made of noble metals were reserved for high ranking individuals, that were wealthy enough to possess such show-pieces. The owner of such a belt demonstrated his affiliation to the elite of society. This was also the case with this strap end celebrating the subject of hunting.

Like later in the Middle Ages and modern times drive hunting on horseback has been an extravagant privilege of the upper class. The extraordinary quality of this work with elaborate perforations and an elegant, skilful mastering of craftsmanship distinguish this piece from the mass of preserved belt fittings. The pattern of the imaged scenery corresponds with similar items in the works of big artistry, like the gorgeous mosaics in the villas of the late Roman aristocracy.