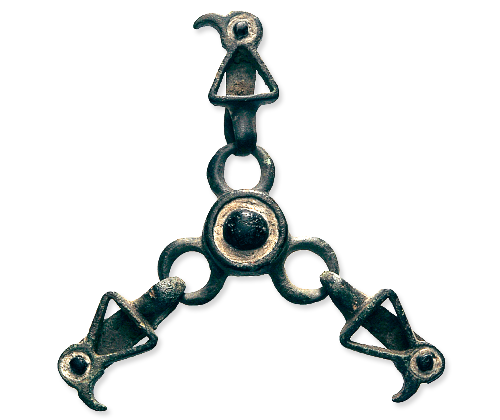 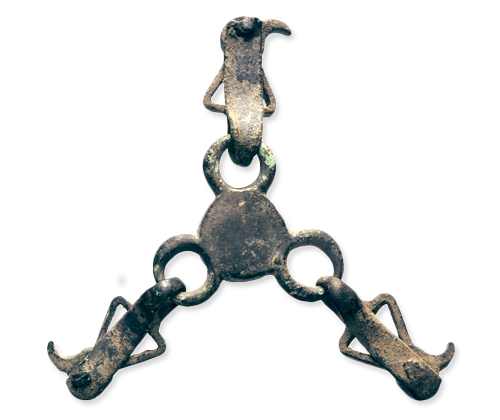 1st half of the 5th. Century AD / Danubian Provinces of the Roman Empire
Three strap fasteners with stylized birds of prey around junction.
Backside with traces of wear of loops and fasteners.

A “romano-barbarian mixed style” developed in the Danubian provinces of the Late Roman Empire after the settling of barbarian tribes as “foederati” shaping the appearance of craftwork during this period.

After the Roman defeat at Adrianople (378 AD) marauding Terwingian Goths and Sarmatic allies were devastating the Balkan Provinces. It was not before the settling of these allied peoples by Theodosius I. as „foederati“ within the borders of the Empire holding self-government as far as possible, that the situation has been stabilized again.

Design and elaboration of many items of costume and daily use belonging to these „foederati“, like brooches, belt buckles and horse harness, were now influenced by the skills of Roman provincial craftsmen. Examples are the decoration with “chip carving” known from Late Roman belt fittings or the lavish use of inlays made of coloured glass or precious stones on works of metal playing an important role in the representation of dignitaries in the Late Roman Empire.

The evolution of art in the late antique mediterranean area was particularly characterized by reduction and abstraction, contrary to the classical naturalism preferred by art styles in the earlier periods of the Roman Empire. The disintegration of organic shapes with flowing transitions into more geometric lines and panels distinguished by hard contrasts became typical. The abrupt change of light and shadow or coloured subareas dissipates contexts and endows the objects with a certain “transparency” respectively “dematerialization”.

The strap junction present here with its highly stylized birds of prey is typical for this new kind of artistry. Forms are reduced to contours and panels, head and eyes are marked by inlays with different colours. The neck, respectively the body is represented by the triangular frame of the fastener, whose metallic splendour contrasted with the colour of the strap visible inside. The bird of prey motive is an important feature of many items belonging to the „foederati“, being definitely of barbarian origin. This feature remained also in use when these peoples founded kingdoms of their own within the borders of the former empire later.

The wear and abrasion of the loops of the central junction and the bows of the fasteners bear witness of the long use and appreciation of this object.