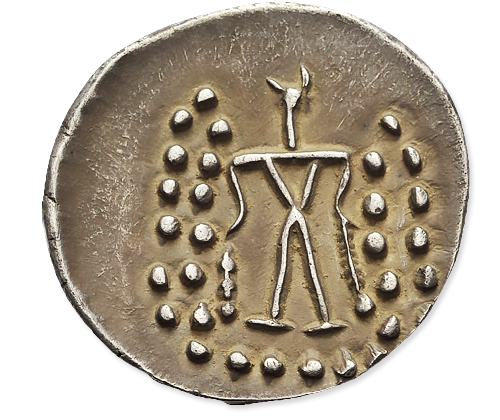 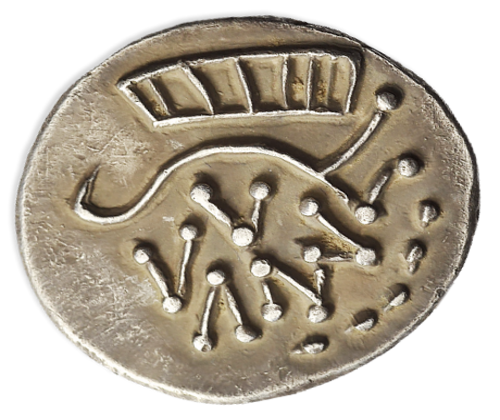 2nd half of 1st century BC / Lower Danube
Hercules with club and lion’s skin.
Extremely abstract head of Dionysos.

Thasian Tetradrachmas were a favorite trade coin in the cultures at the northern periphery of the Greek world. In the late 2nd century BC they have been already produced on the island itself by lesser skilled craftsmen in a lower quality as compared to the classical items of this type in order to meet an increasing demand.

These items became the prototypes for idiosyncratic imitations by several regional centers of the bordering cultures. In the course of time these creations showed more and more a distinctive trend towards abstraction.

The sample presented here belongs already to the latest, third group. Having a knowledge of the prototypes, the „stickman“ on one side can still be identified as Heracles with lion’s skin and club. The die cutter did not try to imitate the misunderstood legend at the sides of the image at all with some kind of flawed lettering. Instead it has been dissolved in rows of points.

The lateral view of the head of Dionysos on the other side has been treated in a similar manner, leaving behind the original motive to such a degree, that it is nearly not possible any more to derive single features of the abstract composition from anatomical details or the god’s headdress. Knowing the stylistical development of the type it can be stated, that the orientation displayed here is surely the right one. An untrained viewer, however, will not be able to adjust the coin in the „right“ way.

These imitations of Thasian tetradrachmas have probably been produced in many smaller centers in rather small emissions with a great number of varieties. Eastern celts have presumably played a major role in this process. They have been infiltrating the Balkans and its native cultures in the course of the so-called Celtic migrations, starting in the 4th century BC. During the 3rd century BC they had founded enclaves within the native territories interacting with the locals in different ways. Many of the home-grown populations at the fringe of the Greek world minted coins with an appearance that usually did hardly differ from Greek coins.