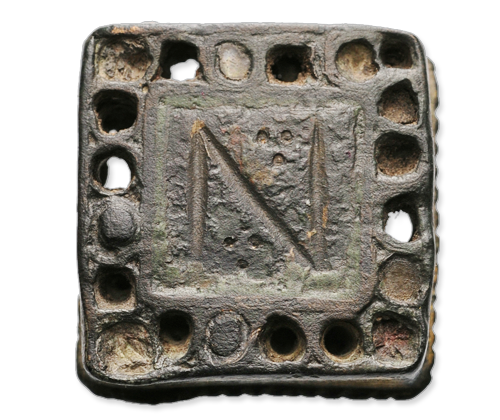 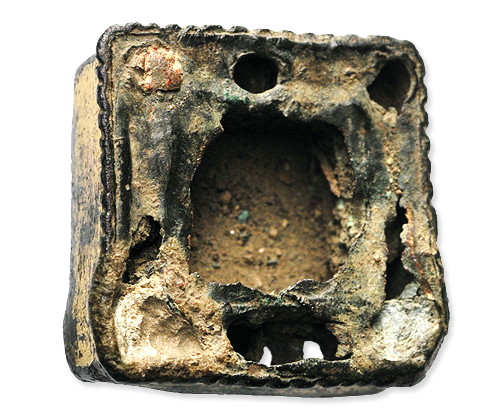 A nomisma weight has been mounted into the belt fitting presented here instead of an inlay made of glass, a semiprecious stone or another material. This kind of weight corresponded exactly with that of a solidus, the most important gold coin in Late Antiquity. Thus this seemingly unspectacular item is a challenge with respect to possible attempts of interpretation, for which interesting proposals can be offered.

Technical details like the case with a height of about 8 mm and several cells for inlays in different colours, the gilding visible at the sides and rests of iron rivets in the corners that once served for mounting to the background, prove that the piece has been a late ancient fitting, probably from a belt. Similar shaped fittings are known from several contexts, especially from belts. The framing with a row of tiny round cells with different inlays is a technical and stilistical feature that allows a rather precise dating into the middle third of the 5th century AD as regards production and use. Only two inlays of transparent, whitish glass and two further ones made of a dark material, tentatively also glass, are preserved. The space between inlays and the bottom plate has been originally filled with some kind of mastic serving to fix the inlays. The atypical use of a nomisma weight in the centre, marked by an „N“, has surely been a deliberate act. Preciously designed belts have been part of the outfit of soldiers and civil officials in Late Antiquity. Thus it is possible to imagine an official practising somehow with regard to coinage or commerce, who wanted to create an optical reference to his profession.

Nearly all of these rather common nomisma weights lack the possibility of an exact dating. Having been mounted into a well datable object this weight can be regarded as one of the rare items of this species, that is connected to a context that allows to deliver a precise „terminus ante quem“ for its production.