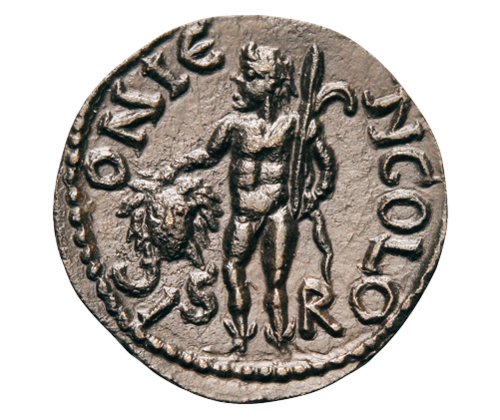 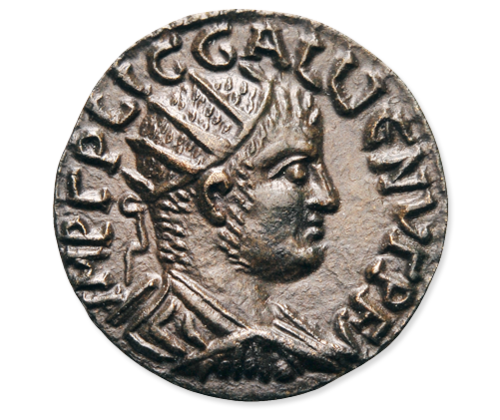 In the East of the Roman Empire many cities struck coins for local circulation, often using an exceptional iconography that cannot be found on issues of the central mints. Prevalently are references to myths of regional importance, as in this case to the legend of Perseus.

Iconium (Konya), one of the oldest continuously populated cities in the world, was located at an important traffic junction in the ancient territory Lycaonia. Since the age of Alexander the Great large numbers of Greeks settled down at this place primary populated by Phrygians. Soon all upper class members of the town enjoyed the Hellenistic lifestyle and proudly displayed it.

The Greek hero Perseus succeeded in killing the snake-haired Medusa with the help of the goddesses Athena and Hermes. The latter gave him the harpa, a sickle-shaped sword, that made it possible to behead the monster. It has been told that Perseus vanquished his enemies in Lycaonia with the cut off head of Medusa, whose aspect turned them into stone. Thereupon he is reported to have transformed an indigenous settlement into a Greek city naming it "Ikonion" after the visage of Medusa ("icon" in Greek for image). Thus the mythical victory of Perseus could also be conceived as the real triumph of the Hellenistic constitution over the Phrygian regime.

The resumption of this motive in the 3rd century AD is in line with the philhellenistic view of life favored by the emporer Gallienus.

Sold by the company Solidus Numismatik in online auction 2 in May 2014.