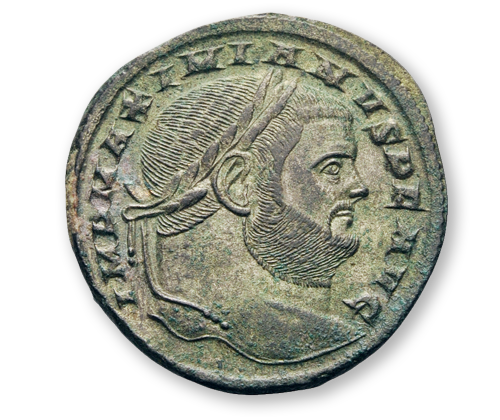 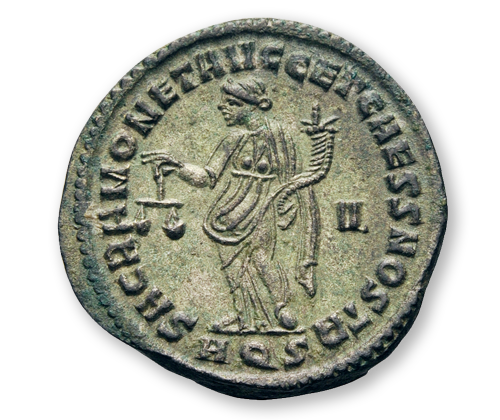 At the end of the 3rd century emperor Diocletian tried to establish a new system of government (Tetrarchy). Four rulers, two senior emperors and two designated successors should administer the Empire together. He chose Maximianus Herculius as his co-emperor in the west. Like him this was a man of simple descent, that had succeeded in climbing the social ladder excelling during a military career, that ended up at in the highest rank conceivable. The tetrarchs were seeking for a new art form expressing the essence of the rule epitomised by their personalities. The compact and massive portrait of Maximianus on the coin reproduced here is a prime example for these soldier emperors’ self-perception.

Already since the middle of the 3rd century a military short haircut has been typical for the portraits of emperors. Renunciating classical ideals of beauty these portraits developed then into proper “square heads”. Contrary to the negative connotations linked to this modern expression the idea behind this concept was a positive one: uniform, angular male heads symbolized resilience and steadfastness, vigour and the ability to cope with challenges; minor details like frontal wrinkles illustrated the concern for the empire’s welfare. The rough character of these images corresponded also to the background of these rulers from a lower social class. During their course of live they experienced hard work. Passing through the hierarchies assertiveness, strength and severity were indispensable qualifications in order to withstand or even survive.

Such qualities have been regarded as important by the tetrarchs in order to manage the challenges of an era, that has been the result of a development that has been referred to in research by the much debated term “Imperial Crisis of the 3rd century”.

The tetrarchs were eager in performing reforms. Among other measures the currency has been restructured and a high grade, stable silver coin has been reintroduced. The dominating change have been big silver plated copper coins called “Folles”. A characteristic sample is represented here.

But neither the tetrarchy, nor most of the reforms of its rulers were a lasting success. The values mentioned above and cherished by the tetrarchs were always at risk of changing into stubbornness, inflexibility and obstination. The last years of Maximianus have been exemplary for this tendency. Whereas Diocletianus consequently renounced an active political career, leaving the government to the designated successors, Maximianus did never desist from his claim to power. Though there were resolute dissuasions by his colleagues he constantly interfered with the fragile system of tetrarchy with fatal consequences. This resulted in his suicide during a hopeless situation in the year 310. It was up to his son-in-law, Constantine the Great, in whose dominion his last usurpation had started, to continue the transformation of the Roman Empire under new circumstances with more success.