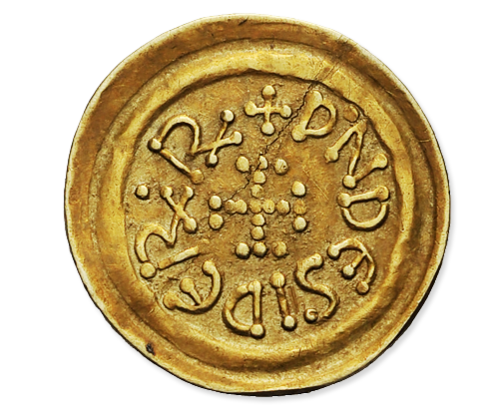 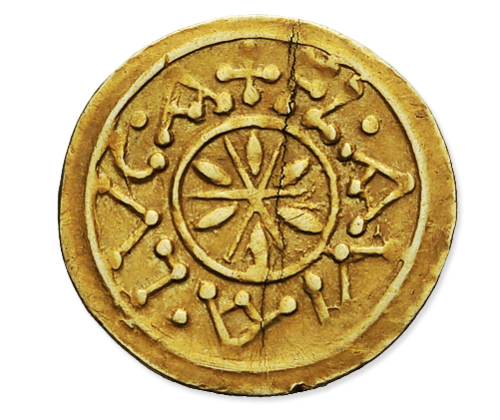 The last king of the Italian Lombard Empire, Desiderius, organized already for his predecessor the Lombard army using the town Lucca as main base, that became an important backing of sovereignity. This coins probably has been minted in the early period of his reign. The attribute „FLAVIA“ before the city name „LVCA“ refers to the Roman imperial familiy gens Flavia according to which the Lombard kings used the epithet „Flavius“.

Desiderius tried to strengthen his dominion by a sophisticated policy of alliances and marriages like many other rulers of this era. Thus he cooperated with regional centres like the city of Lucca and important sovereigns like the Frankish king Charles the Great and the Bavarian Duke Tassilo III. Both of them married daughters of Desiderius.

But his ambitions failed. After a quarrel with Charles the Great and the Pope in the year 773 important allies like Tassilo III. and the city of Lucca seceded from his confederation. Finally the Lombard Empire had been crushed by the Franks.

Compared to other mints this piece from the city of Lucca is a rare one. At the same time it reflects a long time history of collecting: Offered in the auction Ratto, April 1965, Lot 543. From the collection Dr. Ernst von Ferrari, with a hand written ticket of the company “Oscar Rinaldi & Figlio“ including the remark, that Dr. Küthmann and Dr. Overbeck, both former directors of the “Staatliche Münzsammlung München”, regarded the piece as genuine on November 4, 1969.

The present piece is lot 394 in online auction 7 of Solidus Numismatik.