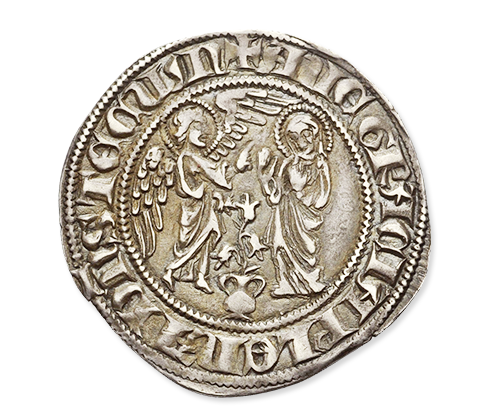 In 1278 the sovereign of Sicily, Charles I. of Anjou (1266 - 1285), introduced a large silver coin in his Southern Italian domain imitating the paradigm of the recently created french "denarius Turnosus". This coin complemented the smaller denarii, that have dominated the currency until then. Thus also in this region a need for silver coins with a higher value was met, a trend, that prevailed quickly in huge parts of Late Medieval Europe.

One side of the coin represents the coat of arms with the Jerusalem cross to the right and the lilies of the Anjou to the left. The other side is adorned with an annunciation scene: The archangel Gabriel salutes the Virgin Mary and reveals to her the birth of Christ. In between a lily as symbol of purity. Accordingly the coin was called "saluto d'oro". The attractive motive made these coins a treasured item for collectors.

Charles's son Charles II. continued issuing such coins until his death in the year 1309. Afterwards the "saluto d'argento" has been substituted by the "gigliato", another type of a large silver coin created during his reign.