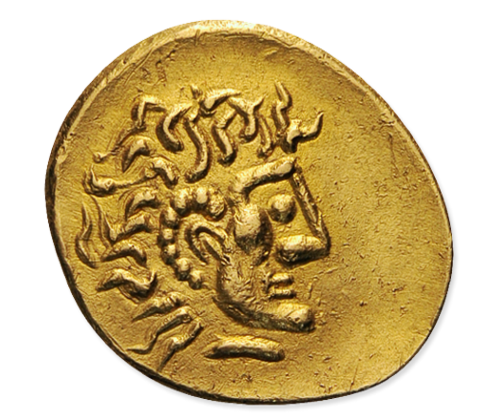 Ca. 100 – 1. half of 1. century BC / unknown Caucasian mint.
Three strap fasteners with stylized birds of prey around junction.
Athena-Nike-motive.

About 200 years after the death of Lysimachos (305 – 281 BC), one of the successors of Alexander the Great in Thrace and bordering areas of Asia Minor and Greece, regional centres of power in Caucasia imitated golden staters of this ruler. The impact of these trade coins has been lasting. Thus they were granted a late revival in the shape of regional interpretations.

Ancient kingdoms in Caucasia, Colchis to the West and Iberia to the East, were important passages of the trade along the so-called “silk road”. Inevitably the coinage of the Hellenistic empires has reached these regions in great amounts, comprising also golden staters of Alexander the Great and his former general Lysimachos, reigning later as king himself. Like Lysimachos, whose coins imitated already patterns of his famous predecessor Alexander, local sovereigns of Caucasia did the same with coins from both rulers. These coins were, however, quite idiosyncratic, but graphically expressive interpretations of their prototypes.

The head of Alexander on the averse as well as the motive of a sitting Athena holding a Nike-statuette are strongly abstracted. The legend with the king’s title and name have been transformed into framing “ladders”. The obvious ties to a trade coin having once been accepted without reservation were surely intended in order to suggest value and trustability of these imitations.